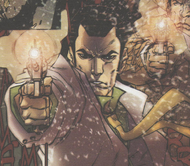 He created The Enforcers and hired the Vulture, Kraven and the Chameleon from freak shows.

He orchestrated the murder of Ben Parker.

Role in the Spider-Man SeriesEdit

Norman has the city of New York under his control and has bought out all state official and police as well as Ben Urich so he won’t take him crimes to the Daily Bugle.

He takes Felicia Hardy and J. Jonah Jameson hostage when Spider-Man attacks him and his men. Spider-Man follows and Norman looses the fight against him telling Spider-Man to kill him but he refuses. In his horror he says he will not be locked up again like he was at the freak show. Kraven then appears covered in Spider's and the two of them tumble into a river.

Retrieved from "https://newspiderman.fandom.com/wiki/Norman_Osborn_(Earth-90214)?oldid=6737"
Community content is available under CC-BY-SA unless otherwise noted.