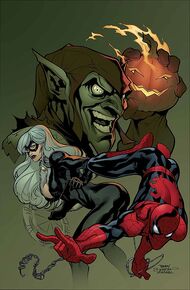 This page is for the collected Story-Arc. For the title please see: Marvel Knights: Spider-Man.

Marvel Knights: Spider-Man (simply abbreviated as Spider-Man) is a twelve part Story-Arc that encompasses three sub Story-Arcs within it (Down Among the Dead Men, Venomous, The Last Stand). It begins with a stand-off against Spider-Man and the Green Goblin (Norman Osborn). The Goblin is captured again and sent to Ryker's Island. A short time after, Aunt May is kidnapped. Peter fights many of his old foes in his search for her. Green Goblin's gathering of Spider-Man's foes is the largest to date, "The Sinister Twelve".

After a deadly battle with the Green Goblin, Spider-Man (Peter Parker) recieves a call saying that they (the caller) has kidnapped Aunt May. Spider-Man starts looking everywhere, asking even his foes where she might be. The Owl says he knows, and that is where Spider-Man starts. All is not what it seems, for the mastermind behind it all has a devious plan to take Spider-Man down.

The main point of "The Marvel Knights" Story-Arc was to show that no matter how many times Spider-Man defeats a villain, they always come back for another battle. In a way the Story-Arc was poking fun at the Spider-Man comics because at the time, many fans grew tired with Norman Osborne re-returning. Spider-Man complains several times about the return of his foes in the Story-Arc.

The Arc gave Peter another chance to evaluate his past once again, his effect of his identity as Spider-Man on his loved ones like Mary Jane and Aunt May.

Also, in the end, Peter recieves a note from Norman, thanking him for the battles over the years and how alive it has kept him, and he just hopes he hasn't aggravated Peter too much. This can also be another poke at the series.

Critics felt that the story line was fairly well written, "the variety of Spider-Man's past foes, the return of Norman Osbourne, and the critical state of Peter's situation is a type of story we've been waiting for." The main thing that critics and fans enjoyed about Marvel Knights was the battles. However, some critics felt otherwise, one stating "we've seen this type of thing too many times in the Spider-Man comics. Norman Osbourne is back... what a suprise. Another incarnation of the Sinister Six? Even though Normie really tried assembling a big team, you'd think they'd learn by now."

Retrieved from "https://newspiderman.fandom.com/wiki/Marvel_Knights:_Spider-Man_(Story-Arc)?oldid=5546"
Community content is available under CC-BY-SA unless otherwise noted.