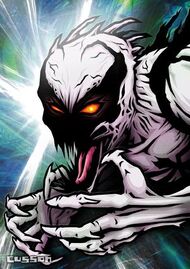 This page is for the super-hero identity.
For the civilian identity see: Eddie Brock.


For a list of Comics and Story-Arcs Anti-Venom has appeared in see: Anti-Venom (Appearances).

Anti-Venom is the anti-symbiotic hero identity of Eddie Brock and Venom.

Anti-Venom has an even more terrifying appearance then Venom had, slighty representing Carnage. Anti-Venom's colors are the reverse of Venom (The white Spider-Symbol is now black, the suit is white), his face is black and eyes are orange. For this reason, he looks evil still, and Spider-Man and the citizens of New York City don't believe Anti-Venom is a hero.

Anti-Venom was created after Martin Li (Mister Negative) cured Eddie's cancer, which Eddie believed to be a miracle, giving Eddie new abilities. When the new Venom (Mac Gargan) attacks Eddie, the symbiote tried to bond with Eddie again but his white blood cells heal and purify the symbiote.

Role in the Spider-Man SeriesEdit

Eddie started working for Mr. Li and Aunt May at the F.E.A.S.T. center to help feed the homeless. It was here that Mr. Li cured Eddie's cancer.

After Eddie Brock was cured, he decided it was time to change and vowed to be a hero. The current Venom at the time (Mac Gargan) broke into the F.E.A.S.T. shelter looking for Spider-Man, and when the symbiote tried to re-bond with Eddie, the anti-bodies created his Anti-Venom symbiote. Later in a fight against Spider-man, he noticed his foe rescue an innocent old man. Inspired, Anti-venom helped Spidey cure the current Venom. He engaged Venom in a fight, and after receiving some help from Spider-Man, cured Gargan from the symbiote, but also felt some remnants of the symbiote inside Peter's blood and began "curing" him as well, but also ended up sucking the radiation from Spider-Man's blood, something that might depower him.

Later, Thunderbolts guards arrived to take the disabled Gargan to the ship while Songbird and Radioactive Man battled Spider-Man and Anti-Venom. After the fight, Anti-Venom snuck on the Thunderbolts ship and stole back Peter Parker's camera, looted by Norman Osborn in a bid to reverse engineer the tracing system allowing the camera to zero on Spider-Man's chest. He was able to help Peter escape Osborn's tracer and forewarns him about the villain's next move in a show of friendship and good-will.

Anti-Venom led Spider-Man to Oscorp and the two split up. Brock disguised himself as Spider-Man to distract the other Thunderbolts while Spider-Man went after Norman. After webbing up Songbird and Radioactive Man to a wall, Anti-Venom faced Gargan, who was now wearing a new Scorpion battlesuit to protect his recovering symbiote. After a grueling battle with Mac Gargan, as Scorpion, hit Anti-Venom with his stinger and injected a poisonous formula that seemingly destroyed Brock's symbiote. Mac Gargan (now Venom) advanced to kill Brock but was met with resistance by his symbiote. The symbiote gained strength and broke though Gargan's battle suit, refusing to let Gargan kill Brock. Gargan explained that the alien still loved Brock too much and gave up, but he promised Brock that he would get past this problem and someday finish him off, to which Brock replied "not if I kill you first." Unknown to Gargan, Brock's Anti-Venom suit reformed. Now a fugitive for helping Spider-Man and fighting the Thunderbolts, Brock was back on the streets, planning to continue his former vigilante antihero career with seemingly increased religious emphasis as The Anti-Venom. He even cured a young girl, Jenna Cole, from her heroin addiction.

Brock was the first person to find out that Martin Li was Mister Negative. In the end, Eddie questioned his own faith and cried out that no one would believe him, because he was a monster.

During the Return of Anti-Venom storyline, Anti-Venom teams up with Spider-Man and the new Wraith to deal with Mr. Negative. Initially Anti-Venom one night went to the harbor to deal with one of Mister Negative's drug shipments and encountered Wraith who got there first. Later after assuming a disguise as a civilian he observed May Parker Jameson have a seizure from meeting with Martin Li for the first time in a while (due to a memory relapse when she discovered his secret), causing Brock to realize that May also stumbled onto Martin Li's secret. Once Li left the center, Anti-Venom attacked his car only to fight a confused Spider-Man who didn't know what was going on only for Anti-Venom to capture him and webbed him to a pillar in his hideout. Even though Spider-Man didn't believe his story about Li being Mister Negative, Anti-Venom brought him to the museum and webbed him to a statue so he could witness the truth as Mister Negative had heroin shipped there that was placed within ancient Chinese terracotta statues, but Mister Negative was waiting for him and defeated Anti-Venom by placing his sword filled with his negative energy to disable Anti-Venom's healing powers (due to Negative's power being the source of his power). Once Wraith arrived and freed Spider-Man, and Spider-Man defeated Mister Negative, Wraith used her face recognition software to confirm Anti-Venom was telling the truth. Afterwards Spider-Man removed the sword from Anti-Venom and they put an end to their previous tenacious relationship.

Spider-Island and Death of SymbioteEdit

Anti-Venom broke free, and after the infestation that plagued Spider-Island, began using his curing abilities to heal New Yorker's spider-powers. At first they were unwilling to give up their powers, so Anti-Venom used force, but once people starting reaching "Stage Three" (mutating into giant spiders) they sought Anti-Venom out at a church. He healed more, and eventually Reed Richard concluded he would need every anti-body in Anti-Venom's symbiote to heal the city. Anti-Venom (who was brought to Horizon Labs by the current Venom, Flash Thompson) agreed, seeing himself as the savior the city needed.

Anti-Venom gave up his powers and symbiote to save New York, and was dubbed the hero of Spider-Island.

Retrieved from "https://newspiderman.fandom.com/wiki/Anti-Venom?oldid=6873"
Community content is available under CC-BY-SA unless otherwise noted.